A few years ago someone gave me a copy of the barn dance notice Emil Borreson had posted in the Whitehall Times and Blair Banner (a combined paper). It had been run as one hundred year old news in The Whitehall Times in 2004. 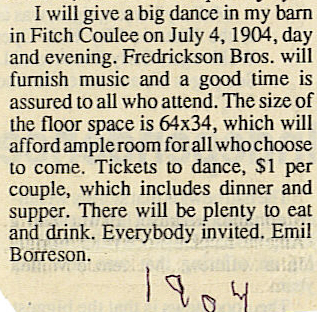 The barn, you may remember, was built in 1901 by Emil’s parents, Elias and Kari. In 1903 they sold the farm to their son Emil and his wife Gina. Apparently a year later, the new owners decide a party is in order on July 4. I checked out the microfilm of the old papers in the La Crosse Public Library and learned that the barn dance notice was on the last page of the June 2 paper, but then on the front page June 9, 16, 23, and 30. Good coverage, I’d say, and perhaps it was as big a dance as Emil promised!

And what a deal: dance, lunch and supper for $1 per couple! As a side note, did you see that we are provided with the dimensions of Emil’s barn too? Nice information.

I wish I knew more about barn dances generally, and I wonder if anybody still remembers hearing about the Fredrickson Brothers who provided the music. About the same time and later, there was a band organized and directed by Theodore Thorsen that was hauled to performances in the “Band Wagon.” In the first two decades of the century another was Iver Johnstad’s Idlewild Dance Band. (This info is from the Trempealeau County rural school history, Many and Memorable.) Gina had Thorson relatives, and Johnstads were related to my mother. All in all, it makes me wonder how many groups the area had going!

This entry was posted in Recreation, Uncategorized and tagged dance bands, The Whitehall Times. Bookmark the permalink.