Posted on November 8, 2010 by Glenn Borreson

As I mentioned, Emil Borreson (grandfather to 29 of us) was born while his parents were staying with friends or relatives in the Halfway Creek area near Holmen. Clara’s Homestead has a copy of his baptismal certificate, so I began there looking for more information.

The pastor signing Emil’s baptismal certificate is U. C. S. Hjermstad. I went to First Lutheran, just eight miles away, and found the Norwegian Ministerial Bog (book) starting in 1870. What a find! There on page one was the baptism listing for Emil on October 6, 1872, along with his parents and godparents. Here’s a copy of part of it for you to enjoy.

The predecesor church to First Lutheran began on October 31, 1870, just two years before Emil’s baptism. The Onalaska history, From Sawmills to  Sunfish, indicated Norwegian Lutheran church services were first in city homes, then in a Methodist church, and only in their own building in 1884. I was interested in these early pastors. I found what appeared to be Hjermstad’s son’s name in a book of pastors’ biographies I have, but I needed more. So to the library. The book on Onalaska history listed the pastors of First Lutheran – and Hjermstad from the baptismal certificate was the fourth (1887-1903)! The first two were Johannes B. Frich (1870-1872) and Wollert Frich (1872-1882) – but not related, at least not brothers according to my biographical source. But which baptized Emil? In a record of the nine church services held in 1872, that year of pastoral change at First, a July 28 note indicated a new pastor leading worship. So on October 1872, it was almost certainly Pastor Wollert Frich who baptized Emil. (Note: Frich is also spelled Frick in some sources.) Here’s his photo. Don’t you love those sideburns?! 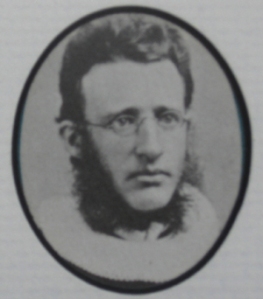 What do we know about Wollert Frich? He was born in Bergen, Norway, was educated at Bergen Cathedral School and Christiania (Oslo) University, and immigrated to the USA in 1872 at the age of 29. He served Halfway Creek at rural Holmen along with five other congregations from 1872-1882. Then he returned to Norway where he continued his pastoral work, beginning at Sogndal near Bergen. (J. B. Frich who had preceded him at Halfway Creek went on to become a professor of theology and President of Luther Seminary [seminary for me and other family members].)

One question I have: if Emil’s family was residing with others in the Halfway Creek area, why didn’t the baptism take place at Halfway Creek itself? It seems as though it would have been closer. Someday I’d also like to check out the godparent names on Emil’s baptismal certificate: maybe they’ll provide a clue or two. By the way, the names of Elias and Kari Borreson were listed as members in that old First Lutheran Ministerial Bog, with a notation that they “moved away.” To Fitch Coulee, of course.

This entry was posted in Churches, Education, Emil Borreson and tagged Pastor. Bookmark the permalink.